Everyone always wants to talk about the shiny Uber Rare units but its highly unlikely an average player will collect them all or even unlock most of them.

You could also be like me and accidently trade-in my newly unlocked Kasa Jizo for NP, one of the lowest points in my Battle Cats experience over this past year :(

It's also difficult to find any up-to-date and decent tier lists for Special, Rare, and Super Rare units as well.

I feel its very important for both new and veteran players alike to have a visual reference, however biased or opinionated a 'Tier List' may be.

I haven't completed all 4* Legends stages or a couple of the advent stages yet but hope this average joe's thoughts and first attempts on this matter does justice and a good source to share.

Please let me know of your thoughts on the matter~!

The thing with uril is fact that he has piercing range and is less prone to missing the target although yes he has a bs and nyandam has a better role and better range than uril, he is still a more consistent anti relic cc and has a less sluggish attack rate.

Also here I revised it although I still might have some mistakes: https://tiermaker.com/create/bcen-special-cats-101-non-collab-755420

Yea uril shuts down relics really well, which is more use than nyan is gonna get since he's honestly niche even within 4*.

Hmm, I think you shared the link to my template. Cause its looking exactly the same as the latest draft I have. Unless we both changed it to reflect the exact same :D

And after saving a template and then re-opening it, will not keep those selected in the final row. Seems to be a Tiermaker website coding error/bug. Opening the saved image however negates that particular issue.

Although another coding error in the Tiermaker website, is the file format is saved at the width of the current screen. So having the final product Landscape/Fullscreen greatly improves its legibility and ascetic.

I've used Chronos to perform a similar role to Nyandam in my own experience. However, Nyandam has served well vs Camelle and other misc stages often enough that I was hesitant to put Nyandam solely in the 4* section.

Taking Ubers into account greatly lessens the impact of many units which is why I tried so hard to base unit placement as much as possible within their own respective use as a unit.

And I'm still unable to edit the OP post, which is annoying. Must be a Fandom function as that's not the case in other forum sites. 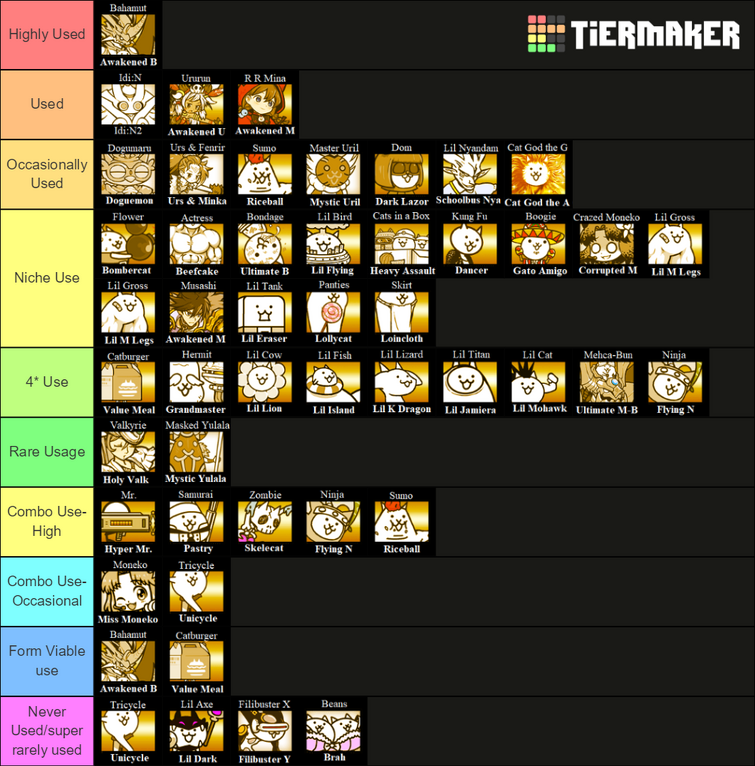 Does it show u this?

Hmm, very interesting. It was not showing this at all.

I did not know that you could manually bypass the 10 row limit.

Great food for thought. I think it'd be interesting to make a mass poll for each unit. I do like how you put more cats into Niche use though.

It might be worth looking into making a 2-part for Specials but idk if that'd be worth considering their overall use...hmmm

Will look Special cats once more.

Ok, went through every single Special cat, looking at their stats and reading up on other people's opinions, and compiled another draft.

What do you think?