High difficulty Stages include Enemies appear in Past Events, one more Stage has been added.

Gold Cat, Neneko, Cat Base Mini and the new Metal Cat available in the Rare Cat Capsule/Gacha for a limited time.

The players can earn 20 Cat Food everyday as a login bonus. 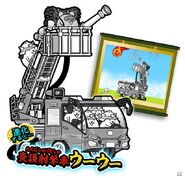 Introduce the new Metal Cat
Add a photo to this gallery

Retrieved from "https://battle-cats.fandom.com/wiki/20_Million_Downloads_Event_(Japanese_Version)?oldid=388869"
Community content is available under CC-BY-SA unless otherwise noted.