Aku Doge (デビルワン Debiruwan, Devilwan) is an Aku variant of Doge that appears in The Aku Realms and Legend Stages.

Aku Doge has very high DPS, even more than Gabriel, but still has short range and single-target attacks like the original Doge. His only ability is a Shield that regenerates with 50% HP each time he gets knocked back; this Shield starts with the same amount of health as Aku Doge himself, so it effectively gives him 2.5x as much HP if you don't use any Shield Piercers. Additionally, he has the range of a meatshield, so he can block your single-target Shield Piercers such as Talented Lil' Macho Legs and Aku Researcher from hitting more dangerous Shielded enemies like Fallen Bear.

Use strong attackers like Dancing Flasher Cat or Dragon Cat, Area or otherwise, if there is only one Aku Doge. If there are multiple, use strong Area Attackers like Drama Cats. This will break the Aku Doge's Shield, allowing you to knock him back. Then do the same thing again one more time. Another great way to dispose of single Aku Doges is to use Slime Cat, as it can break the Shield with its initial attack and kill off the Doge with the wave. However the Aku Doge will always take down Slime Cat with it, which is great for stalling in stages like Seahorses Caught.

Interestingly, Eraser Cat at level 20+90 can take three hits from a 600% Aku Doge, which is its currently Aku Doge's highest magnification, whereas Manic Eraser Cat can only take two. 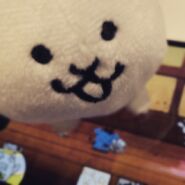 Aku Doge in a teaser for Version 10.8