Aku Gory (ヘルゴリラー Heru Gorirā, "Hell Gorilla") is an Aku variant of Gory that appears in The Aku Realms and Legend Stages.

Aku Gory has high health, insane DPS and less knockbacks than Gory Black or Angelic Gory, but is slower than both variants. His Savage Blow ability only has a 10% chance to activate, but it can be strong enough to cause a dent in your frontlines.

Treat him like you would any variant of Gory. Units with high DPS such as Paris Cat can take care of him easily if stacked, but tanks are not recommended due to his rapid attacks. His range is quite low, so using crowd-controllers that outrange him such as Thaumaturge Cat to make him less dangerous is a good choice. 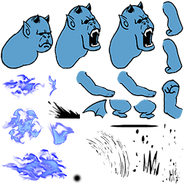