Ancient Egg: N201 is a Special Cat that can be obtained from the June Bride of the Devil event. It was added in Version 11.6. True Form massively improves almost all attributes and grants Behemoth Slayer.

These forms are useless by design. Similarly to the other Ancient Eggs, this unit is not meant to be used before its True Form.

Simply put, Exorcist Cat is a sub-par anti-Aku. This boils down to a few problems, chief of which is the lack of Shield Piercing. Most Aku enemies have Shields that nullify all attacks and, more importantly, status effects including freeze. As such, Exorcist Cat is a compatible counter for a very slim number of Aku. Exorcist Cat has no immunity to Surges, and many Aku possess the ability to release a Surge when attacking or dying. This is a huge problem for Exorcist Cat, as it doesn’t have the health to survive even a weak Surge Attack. Lastly, Exorcist Cat has a disappointingly small range, further limiting his already-niche usage.

Overall, the only Aku worth using Exorcist Cat against is Aku Gory, who has melee range and no Shield nor Surge Attacks. However, Aku Gory pushes extremely hard, and so support from other units such as Komuso Cat may be required.

*First stats are 1st form's initial, second and third stats include 300% Empire of Cats Treasures; recharge time may vary.
*Time between attacks is the time from the attack's execution to the start of the next attack (includes backswing).
*For units with multi-hit attacks, attack animation is the part of the animation leading up to the first hit.
*Fruit Treasures not included.
*See this section to calculate Ancient Egg: N201's stats. 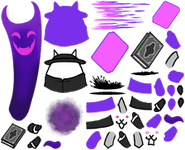