Angel Fanboy serves as a weak enemy to remind you that Anti-Floating cats, such as Shaman Cat, Kotatsu Cat and Mer-Cat, will not deal Anti-Floating effects to Angel Enemies. He only does 1 damage with a long delay on attacks, has 5 health, drops almost no money on death, and is classified as a Metal enemy. He only appears in 8 stages, which renders him a glorified peon whose sole purpose is to remind you of enemy mechanics.

His very low health and attack power make him pathetically easy to defeat, and at the points where you encounter him, he should be the least of your worries. With that being said, use any cat that you have to defeat him easily. 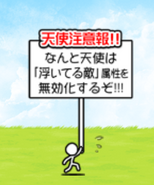