Assassin Bear is the fastest-moving and one of the fastest-attacking enemies in the game. At 100% strength magnification, he deals 3,000 area damage per hit, which might not seem like much, yet he keeps himself very safe at 800 range, almost double that of Dark Emperor Nyandam (500).

This enemy is usually used as a means of guaranteeing defeat, by spawning en masse and/or at extremely high buffs once a time limit or condition is reached, sometimes pre-announced by a Ms. Sign, making him a makeshift time limit. However, this does not happen in every stage. There are also stages in which he is actually meant to be defeated, such as Twilight Poachers, Littering Coast and False Resurrection.

In stages like Merciless Onslaught, Ashen Rain and Veggie Friends, he is used as a gimmick, in which he spawns as soon as an enemy perishes, due to the enemy limit, leading into an instant defeat. This means you need to use the enemy limit to your advantage and keep the enemies alive.

The default Cat Cannon can kill an Assassin Bear easily, however at higher magnifications it cannot deal enough damage, meaning a certain defeat in most cases. Thankfully, these overbuffed Assassin Bears are always easy to avoid fighting in the first place, except in Surrealist Sins if you're not careful. Another way to beat him is to use a Cat Unit that can reach and kill the Assassin Bear without dying; options include cats with very few knockbacks and either fast speed or high health (at least against Black Enemies). The faster the speed, the lower the heath needed. Glass Cat, Express Cat, Sanada Yukimura, Stone Cat and Manic Jamiera Cat are some examples.

Using Wave Attack Cats/Surge Attack Cats works too, as long as he isn't too buffed. If the Assassin Bear comes out when the base receives enough damage, that means that he will also spawn onto a Wave or Surge and most likely die. In other scenarios, it's still possible to hit the bear by using a peon as a "stepping stone" and long enough Waves. Outranging him is another option. It is rare, but there are some cats that can do it. One common option is Cyberpunk Cat. 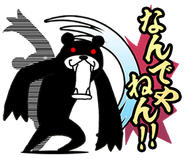