This version is the first Monthly Event in Nyanko Daisensou, it only contains 3 stages with no exclusive enemy. The event-chapter was reworked to have 8 stages and a new event enemy. 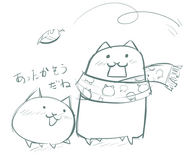