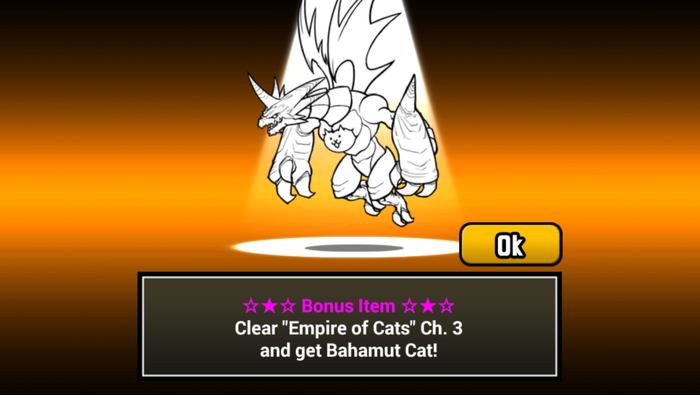 This article is about the Cat Unit. For the enemy, see Raging Bahamut Cat.

Bahamut Cat is a Special Cat unlocked by completing Empire of Cats Chapter 3. His True Form gains Multi-Hit, improves his attack power and movement speed, and reduces his range and recharge time.

Evolves into Awakened Bahamut Cat at level 20 after completing Into the Future Chapter 3.

Bahamut Cat has devastating attacks and is recommended for most of the earlier stages. Unlocking him makes early Stories of Legend sub-chapters much easier, as he can take out the majority of the enemies in just a few hits. Bahamut is not without weakness, as he suffers from average health and slow attack speed, making using him a less than viable option when more viable units exist, particularly Uber Rares; and anything that outranges him (such as Master A.) will forever perma-knockback him, rendering him useless. Bahamut's slow movement speed is usually used to the player's advantage, as he can be stacked on weak peons before the boss wave of the stage, occurring on base hit. Dark Souls and Absolute Defence are great examples of stages this works on.

Bahamut Cat's True Form takes the purpose of its first two forms and completely flips it on its head. Bahamut's attack speed and movement speed are greatly increased, as well as his knockback count being doubled and gaining multi-hit. However, this comes at the cost of his range being cut by more than half, changing him into a melee unit. Use Awakened Bahamut as a suicidal Nuker, as he will rush the enemy base or deal heavy damage to the boss before they attack him. Be warned, however, as Awakened Bahamut Cat will die often due to his short range typical of Rusher-class units and his low health. Awakened Bahamut Cat is also very useful for dealing a lot of damage to long-ranged enemies with slow attack rates like Sunfish Jones. With proper timing, he can even enter the blind spot of Long Distance Enemies such as Mr. Mole and Henry; part of the main strategy for Learned to Love and False Resurrection.

He can be put to great use in Timed Score stages, thanks to his jaw-dropping DPS and incredible movement speed. Awakened Bahamut Cat can also be used to clear waves of low-range swarm enemies, such as Li'l Bun Bun and Manic Lion Cat, as long as he is protected properly because of his extreme DPS allowing him to cut through these enemies with ease; but like his two previous forms, DO NOT use him against rapidly-attacking Enemies with a signifigantly higher range than him, as he will die while doing nearly nothing! On a much lesser note, while it is nearly impossible to master, Awakened Bahamut can be used to clip through enemies and cheese a stage with the help of a Sniper the Cat or the normal Cat Cannon.

*First stats are 1st form's initial, second and third stats include 300% Empire of Cats Treasures; recharge time may vary.
*Time between attacks is the time from the attack's execution to the start of the next attack (includes backswing).
*For units with multi-hit attacks, attack animation is the part of the animation leading up to the first hit.
*Fruit Treasures not included.
*See this section to calculate Bahamut Cat's stats.

Before Kyoutou Project was removed, Bahamut Cat appeared in it as an enemy and obtainable collaboration unit.