Though weak initially, each encounter with Baron Seal is more difficult than the last. He has a rapid attack rate and can freeze and/or weaken any units that survive his attacks. However, he moves quite slowly. He also has 320 range, making most melee attackers useless at higher magnifications where tanking becomes less and less possible. 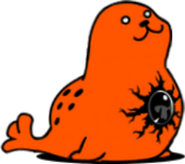