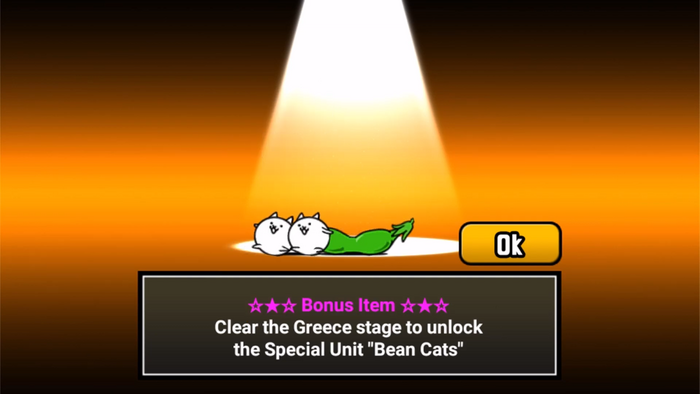 Bean Cats are a Special Cat unlocked by completing Greece/Shiga in Empire of Cats Chapter 1.

Before 3.2.0, they were unlocked by achieving 3 people inputting your invitation code.

Evolves into Brah Cats at level 10.

Only use Bean Cats when they can be protected as they are quite fragile. They can be used to knockback Reds while your heavy attackers (Bahamut, Titan Cat, etc.) deal with other threats. The Bean Cats are made obsolete by Pirate Cat, since Pirate Cat has longer range, shorter interval between attacks, shorter recharge time and 10% more knockback chance in True Form, which makes him more effective and easier to stack. Also, he only costs 15¢ more by Chapter 2 standards. The two of them can be used together if Pirate isn't enough alone.

Even for players without Pirate Cat, they can usually be replaced by Witch Cat or Apple Cat for stalling Reds, along with other units who are significantly better. However, they are included in Team of Two, a Unit Defense Up M Combo which also contains Bouncing Four and Double Date.

*First stats are 1st form's initial, second and third stats include 300% Empire of Cats Treasures; recharge time may vary.
*Attack frequency is the time between an attack is delivered and the next.
*For units with multi-hit attacks, attack animation is the part of the animation leading up to the first hit.
*Fruit Treasures not included.
*See this section to calculate Bean Cats's stats.