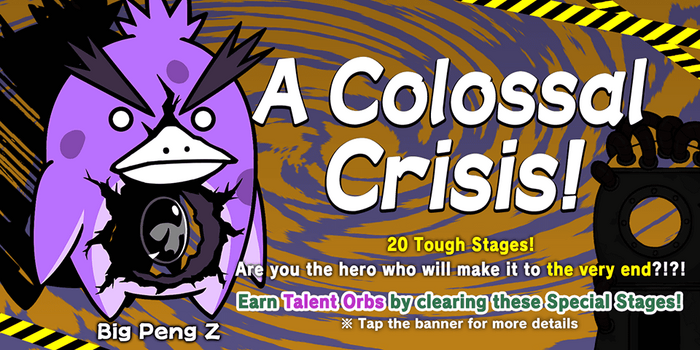 Big Peng Z Strikes (ビッグペンZ強襲 Biggu Pen Z Kyōshū, Big Peng Z Assault) is an event added in Version 11.1. Like all Gauntlets, progress made in Big Peng Z Strikes will reset when the event ends, allowing the player to collect the rewards again once the event returns. The boss of this Gauntlet is Big Peng Z, a variant of Zackie Peng with long-reaching Omni Strikes and a 100% chance to deal Toxic damage to Cat Units.

Big Peng Z Strikes contains a total of 20 No Continues levels, called Wandering Lvs. After beating a Wandering Lv, the player must wait for 30 minutes before they may proceed to the next one. Rewards for the first completion of a Wandering Lv can include XP, Tickets, Catamins and Materials. Every 10 Wandering Lvs plays out the same, but the strength magnifications and enemy base's HP are increased with each level.

After clearing any stage in this gauntlet, players have a chance to enter one of the following Continuation Stages: