Black Wind is a Black enemy that appears in the JRA Collaboration Event.

Despite being the strongest enemy in the JRA Collaboration, it has pathetically low stats and is pretty much the same as the two other winds with the minor difference of having no special ability and having the black trait.

No threat can come from this, Black Wind will mainly target the player's Meatshields while ranged attackers such as Dragon Cat, Sexy Legs Cat and more can easily take care of it. 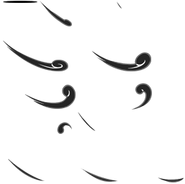