Evolves into Everbloom Kamukura at level 10.

Blooming Kamukura can be used either as a ranged damage dealer, thanks to his range and damage, or to crowd-control Metal enemies. His slow and knockback ability can deal with Metal enemies very well because most of them have very low range, overall this unit is only average across the board.

Everbloom Lord Kamukura now targets Aku enemies for a 50% chance to slow them or knock them back. This ability can be useful against some Aku enemies, though the lack of Shield Piercing limits his usage against Shielded Aku enemies. His immunity to waves also helps somewhat against Wicked Face, Possessed Empress, and Deathkory, as they all attack with either regular waves or mini-waves. However, all of them are protected by Shields, thus meaning that Everbloom Lord Kamukura's compatability against them requires a different Cat to pierce them.

*First stats are 1st form's initial, second and third stats include 300% Empire of Cats Treasures; recharge time may vary.
*Time between attacks is the time from the attack's execution to the start of the next attack (includes backswing).
*For units with multi-hit attacks, attack animation is the part of the animation leading up to the first hit.
*Fruit Treasures not included.
*See this section to calculate Blooming Kamukura's stats. 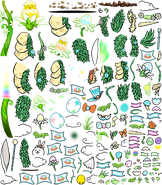