Not to be confused with Wicked Tank Cat.

Brainwashed Tank Cat is a Super Rare Cat that can be unlocked by playing the Rare Cat Capsule during the Xmas Gals event. It was added in Version 11.0.

Like Tank Cat, Brainwashed Tank Cat is a short ranged, disposable unit meant to take the hits in place of others, protecting damage dealers from enemies, but he doesn't quite work the same way. Unlike Tank Cat, his recharge time, regardless of treasures, can never reach the minimum and his health easily falls behind too, though it will still be more than Eraser Cat's for a small chunk of early game.

Since Brainwashed Wall Cat ends up with about half the health and twice the recharge of Eraser and Crazed Tank/Manic Eraser as the game progresses, the protection he gives turns out to only be a little more than a fourth of that provided by the other two. Luckily, his resistance does make him four times as tough against Traitless, not only making up for the stats, but allowing for improvement through combos that the other Erasers have no access to. He doesn't have much of a breakaway stat-wise, so he should still only be considered for use in stages where all damage of relevance comes from Traitless enemies, as he ends up severely outclassed otherwise.

Due to the way he works (more health, less recharge, assuming the opponents are Traitless), he is more susceptible to overkill damage, thus less recommended against high DPS armies, where even Mohawk variants may work better, but he does tend to work better against high damage per hit enemies, such as Kory.

Just like Artist Cat and Wushu Cat with their targeted traits, Brainwashed Tank Cat can be combined with the combos Bony Bone, Biohazard and Horror Movies for ultimate defence against traitless enemies.

*First stats are 1st form's initial, second and third stats include 300% Empire of Cats Treasures; recharge time may vary.
*Attack frequency is the time between an attack is delivered and the next.
*For units with multi-hit attacks, attack animation is the part of the animation leading up to the first hit.
*Fruit Treasures not included.
*See this section to calculate Brainwashed Tank Cat's stats. 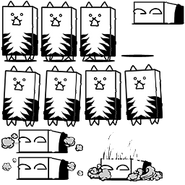