Capy (カルピンチョ Karupincho, Carpincho) is a Red enemy that appears in The Aku Realms and Legend Stages.

Since she is a single-target attacker, Capy will only target the nearest cat, but Capy does insane damage to the cat that she attacks. She has huge health and DPS and a 15% chance for a Critical Hit, so there is no way to tank her attacks without your tankers going down in seconds. She also has 335 range, so meatshielding and using ranged attackers is the way to fight her.

She is very easy to stall with meatshields, as she is a single-target attacker. However, if she is supported by bosses like J.K Bun Bun, the latter can wipe out all the shields for Capy, giving her an opening to hit stronger cat units (notably in Oil Platform and Morning Rush Hour).

Capies are usually fought in multiples. With the right support, groups of Capies can actually push, so try using the Cat Cannon to sync their attack animations. This is particularly important in Morning Rush Hour, where you have to use a "ranged meatshield" such as Gross Cat to bait them out; see Lucas IV's video for more information.

There is no difference between Eraser Cat variants and other 75¢ meatshields getting killed in one hit, so bringing 75¢ meatshields is recommended over the former. Kyubey Cat is also useful against Capy due to its 40% chance to survive a lethal strike.

"Strong" Effect UP Combos on Crazed Fish and Island Cat work greatly against a single Capy, and fantastically against multiple, if meatshielded properly.

Capy's Zombie variant with less health, attack power, range, and no Critical Hits in exchange for a faster attack rate and plenty of other abilities such as warp, wave and surge immunity, and reviving. 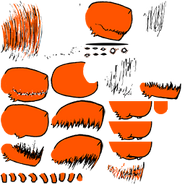 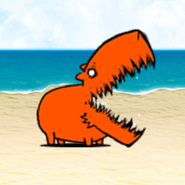