For other uses, see Cat Bros.

Cat Bros is a Special Cat that can be unlocked by inputting a special serial code in the Japanese Version. It is now unobtainable due to Serial Codes can no longer be input to the game. Cat Bros can be obtained in the English Version when the official PONOS page gets 111,111 followers started from Mar. 21st, 2017. The cat became obtainable again on May 1st, by beating the "For the Fans" limited time special event. This unit is obtainable on the Nintendo Switch version when beating any stage with a lineup consisting of; Macho Cat, Wall Cat and Brave Cat.

Evolves into Secret Base at level 10.

Due to low stats and high cost this cat sees little use outside of early stages, it is not recommended to invest in. Use Salon Cat, Cameraman Cat or most other area attackers as a better alternative.

*First stats are 1st form's initial, second and third stats include 300% Empire of Cats Treasures; recharge time may vary.
*Time between attacks is the time from the attack's execution to the start of the next attack (includes backswing).
*For units with multi-hit attacks, attack animation is the part of the animation leading up to the first hit.
*Fruit Treasures not included.
*See this section to calculate Cat Bros's stats. 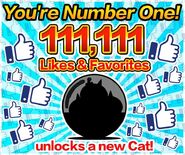 Retrieved from "https://battle-cats.fandom.com/wiki/Cat_Bros_(Special_Cat)?oldid=522826"
Community content is available under CC-BY-SA unless otherwise noted.