Cat Capsule (or Gacha (ガチャ) in the Japanese Version) is an area where the player can spend Cat Tickets, Rare Cat Tickets, Lucky Tickets and Cat Food to obtain Cat Units and Ability Capsules. The rewards earned are then either immediately used, immediately exchanged for XP/NP, saved in the Cat Storage to be used later, and some can even be exchanged to get a Rare Ticket!

Each day, the player gets 1 Cat Ticket. As a login bonus these Tickets can be used at any time to roll the Cat Capsule (also known as the Normal Cat Capsule). After rolling the Normal Cat Capsule, the player will get an upgrade (either any of the Normal Cats or an Ability Capsule - a blue orb with a symbol depicting which Base Upgrade it will affect). Receiving a Cat Unit will allow the player to upgrade the collected Normal Cat's level by one. Unlike the normal unit level, the Tickets will add a level that can surpass 20. This leads to units such as Mohawk Cat and Eraser Cat having massive potential power. Receiving an Ability Capsule will allow the player to increase the base upgrade of the symbol on the orb by one. These upgrades are the only way for the Normal Cats to pass the level cap of 20, but the base upgrades cannot exceed the total level of 30 and the maximum level cap for Normal Cats is fixed by the player's User Rank.

If any base ability has already reached maximum, a total level of (20+10)=30, the player can then exchange each excess Ability Capsule for a count of one towards the total number of five Ability Capsules required to obtain one Rare Cat Ticket.

Occasionally there are also Item Capsule Events which allow an alternative set of rewards for basic cat capsule. Item Capsules contain various items & XP tokens, which replace cat unit and catbase tokens. For info on all of the different types of Item Capsules, see here.

An addition added in the Version 11.0 Update and released in the Version 11.1 Update. The upgrade to the regular Cat Capsule can be obtained after beating Even Stars Burn Out of Cats of the Cosmos. The Normal Cat Capsule will be upgraded to a Cat Capsule+ which makes all the cat units obtained from it sell for 2 NP rather than 1 and adds a new basic cat (Superfeline) to the pool as well as increasing the 64 storage limit to 128, similar to the Catfruit storage.

From time to time, the player can get a Rare Cat Ticket (or Gold Ticket in the Japanese version), by purchasing it with Cat Food, clearing certain stages, trading 5 Ability Capsules or as Stamp Rewards. These tickets can be used at any time to roll the Rare Cat Capsule. After rolling the Rare Cat Capsule, the player will get a Gacha Cat (Rare, Super Rare, Uber Rare or Legend Rare Cats). Most of the time, the rarity of the Cat fixes their interval of cost (Uber Rare Cats' cost is usually over 3000¢, for example) and their power (you expect an Uber Rare Cat to be stronger than a Rare Cat). Thus, Uber Rare Cats and Legend Rare Cats are more desirable, but are usually not a direct replacement for more common units.

The only other way to alter the already preset roll-result sequence, and therefore 'chance' to obtain an Uber Rare Cat is to make extensive use of a Guaranteed Uber Rare Cat Campaign within the desired Gacha event. Patience is a virtue.

Note: Saving Rare Cat Tickets does NOT provide an option for 11-capsule draws.

The Uber Rare Cats and Legend Rare Cats that one can get are fixed on a schedule. Usually, the pool of Uber/Legend Rare Cats changes every two days. Before playing the Rare Cat Capsule, the player can see the actual pool. From time to time, additional Super Rare Cats are added.

If the player gets a Gacha Cat they already have, they can use it as an upgrade for the same cat. This is the only way to pass the maximum level cap (using only XP) of Level 30 (alongside using Catseyes up to level 50). Almost as much as with Normal Cats, using the extra copies of cats is a far better option than exchanging them for XP.

However, the first time the player gets these cats they should be used, as each is included in a Cat Combo and will reward 5 Cat Food as a new addition when checked in the Cat Guide.

This Gacha follows the same rules as a Collaboration Gacha. These pools tend to contain regular Uber Rare Cats with a new appearance, a new ability and sometimes new stats. Examples are the Holiday events, such as Gals of Summer and Halloween Capsules, and Girls & Monsters, which includes characters from GirlsMons and Kyoutou Project.

Cost of the Rare Cat Capsule

Note: You can only purchase instant draws. Thus, you cannot purchase a discounted 11-capsule draw then save it for another pool... If you already have Rare Cat Tickets, you have to use them before purchasing single draws.

During the Red Busters, Air Busters, Metal Busters and Wave Busters events, a Step Up option with three steps appears.

The Platinum Capsule is an uncommon type of Cat Capsule that will appear whenever you have a Platinum ticket or shard. It requires Platinum Tickets to spin, which can be obtained with real money or as special rewards. This capsule will always drop Uber Rare Cats. Only one may be purchased per appearance, though there is no limit to how many a player can hold.

Aside from the regular and rare Cat Capsule, there are limited collaboration capsules that arrive during certain collaborations, most notably Monster Hunter, Nebaaru-kun and Nyanpazuru and the most recent, Bikkuriman.

These limited collaboration gachas have a chance to drop items from the regular Lucky Capsule as well as units from said collaborations. 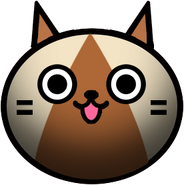 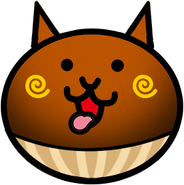 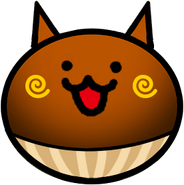 Throughout the Lucky Capsule Limited Event players have a chance to obtain one or more Lucky Tickets each time they complete one of the Limited Event's Special Stages.

After rolling the Lucky Capsule, the player will receive one item from the selection shown below which includes Battle Items, XP and Special Cats, tiny versions of the Normal Cats called Li'l Cats.

The Lucky Capsules G event was first introduced in the 7.1 Update.

The Lucky Capsule G event is linked to a Monthly Event as a Limited Event which always appears on the 16th through to the end of the main Monthly Event.

When a Lucky Capsules G Limited Event is active, the player can use any Lucky Tickets G to roll the capsule and obtain one item from the selection or Catamins and XP tokens shown below .