This article is about the Cat Unit. For the enemy unit, see Cat Kart P (Enemy).

Cat Kart R is a Rare Cat that can be unlocked when beating any stage in The Battle Cats POP! True Form increases attack power and adds Multi-hit.

Evolves into Cat Kart P when obtained from Cat Kart Awakens! (may be dropped on the first stage but guaranteed on the second stage) and is level 20 or above.

Low stats give this unit very little usage. It's completely outclassed by Thief Cat, not only because of + levels, but also because Thief Cat's True Form has area attack. Even in the non-gacha department, it gets outclassed by Reindeer Fish Cat because of greater stats and True Form giving area attack. Overall, it's not recommended to use this unit. However, it CAN be useful in very specific situations, mostly for out-ranging Trolly Blogger.

*First stats are 1st form's initial, second and third stats include 300% Empire of Cats Treasures; recharge time may vary.
*Time between attacks is the time from the attack's execution to the start of the next attack (includes backswing).
*For units with multi-hit attacks, attack animation is the part of the animation leading up to the first hit.
*Fruit Treasures not included.
*See this section to calculate Cat Kart R's stats. 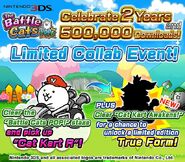 Retrieved from "https://battle-cats.fandom.com/wiki/Cat_Kart_R_(Rare_Cat)?oldid=516410"
Community content is available under CC-BY-SA unless otherwise noted.