A countdown battle with endless enemies. Beat down as many as you can for the top score!

Catclaw Dojo is a game mode unlocked upon clearing Empire of Cats Ch. 1. The Dojo consists of levels with an invincible and OHKO-delivering base and constantly spawning enemies, with a time limit. There is a score to these levels, which increases only through defeating enemies. The level ends once the enemies take down the Cat Base or time runs out, whichever comes first.

The Dojo is found beside Empire of Cats, Into the Future and Cats of the Cosmos and Legend Stages from the Main Menu. 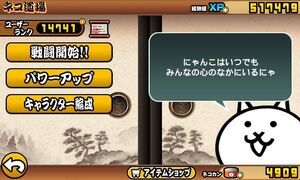 You have a time limit to defeat as many enemies as possible. The game supplies you with unlimited Speed Ups and Cat CPUs; however, you cannot use other items. The base has unlimited health and attacks cats under a certain range. You gain no money for defeating enemies.

Fixed Stages: Dojo Stages that are available all the time.

Event Stages: Events for the Dojo mode were planned as early as version 6.0 and finally become available on July 31th, 2017 in the 6.3 update.

Where the Dojo was prior to Version 6.2

Where the Dojo is currently located

Inside Hall of Initiates

Inside Wanderer's Trial (Stage 1)
Add a photo to this gallery
Retrieved from "https://battle-cats.fandom.com/wiki/Catclaw_Dojo?oldid=400569"
Community content is available under CC-BY-SA unless otherwise noted.