Catfruit (マタタビ Matatabi, Actinidia) is an item added in version 5.0 of both The Battle Cats and Nyanko Daisensou. This item allows you to evolve certain Special Cats, Rare Cats, Super Rare Cats, and Uber Rare Cats to their True Form using different amounts of Catfruit. This feature is only unlocked after clearing the 3rd chapter of Empire of Cats.

Catfruit is a drop-chance item obtainable by clearing related Growing stages which appear on certain days only in a weekly cycle. Catfruit is separated into three tiers of rarities. The first two tiers are separated into five types; Green, Purple, Red, Blue, Yellow and Elder while the last one has a rainbow color. The types in total are 14 kinds as below:

Each Catfruit color has only one related chapter which appears in Legend Stages as a special chapter for a period of time; each day, only one of the color chapters appears. Ergo, there are five chapters for each color which fill five days in a week. The only exceptions are Catfruit Jubilee which can appear randomly after completing a Growing stage, along with Elder Catfruit, which is received from Growing Strange. Each chapter consists of enemies of certain type. The chapters appear in a cycle as follows:

Each chapter consists of three stages of progressive difficulties. The higher the difficulty of the stage, the higher the tier of enemies/bosses. They will also spawn faster and have higher strength magnifications. However, higher difficulties also have a higher chance to obtain a better tier of Catfruit and chance to face Catfruit Jubilee should the player clear the initial stage. Catfruit Jubilee does not allow the player to bring any items except for Speed Ups and forces the player to use the last formation from the previous stage, as it is a Continuation Stage. The chance of obtaining a Catfruit of any kind from the stages are as follows:

Same as the general, though has 3 stages. You will face the stages in the daily order on weekdays. After that, you enter Catfruit Jubilee at 100% chance. Each stage uses up 500 energy. 2 times efficient than doing the stages normally! (each uses up 200) The stages are in Hard, then, Expert last, Insane. (NOT in continuation levels)

At first glance, Growing Strange only contains one stage, An Elder Secret (Merciless). However, when the aforementioned stage is cleared, one of seven other levels will be accessible, similar to Catfruit Jubilee. Although they have the same difficulty rating, these stages are considered to be far more difficult than the first one. The first level contains every trait (excluding Relic), while the others contain one trait each. The chances for each type of drop are as follows:

Upon obtaining a Catfruit, it will be saved into the Catfruit Storage.

The main usage of Catfruit is to unlock certain units' True Forms if available, which requires Catfruit. Each unit requires different amounts of Catfruit along with XP to evolve. The requirements for each relevant cat are listed in their respective wiki pages.

Different units require different amounts and types of Catfruit. Most Cats use the most of the Catfruit color which is obtained from defeated the enemy type they are strong against if applicable. Artist Cat → Ramen Cat is a good example. Artist Cat's evolutionary line is good against Angels — it resists their attacks. As thus, Artist Cat needs the most amount of Yellow Catfruit to evolve as Yellow Catfruit is obtained by defeating Angels. 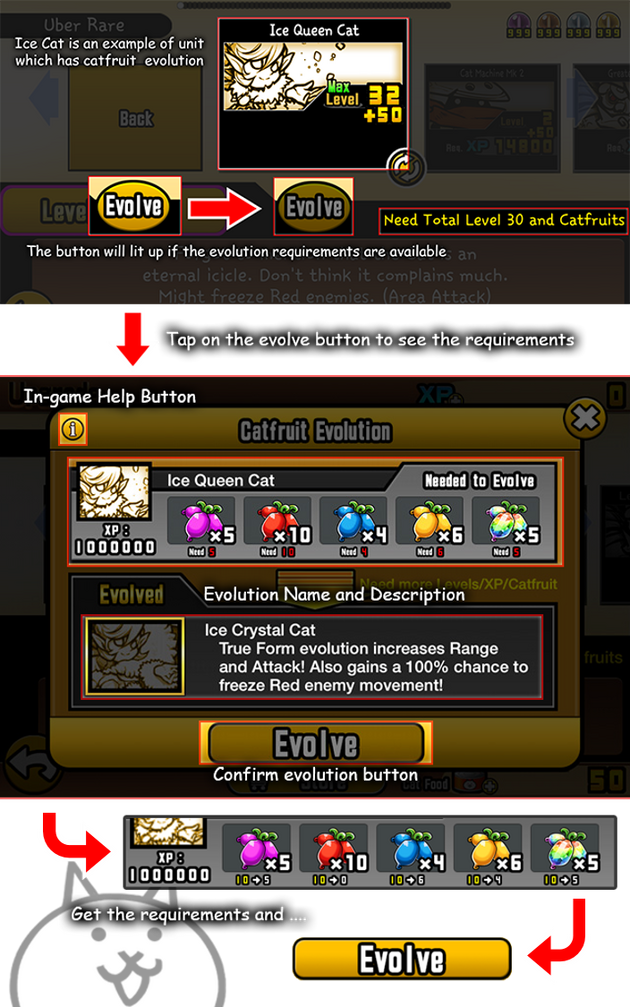 A Cat on the evolution screen. Note the different colours of Catfruit.

Catfruit Evolution Result Screen
Add a photo to this gallery