The Battle Cats has been growing and growing since it's release almost 3 years ago! Now we've reached 30,000,000 downloads, and the weirdly cute felines are being enjoyed by players from all over!
To celebrate our global community, we’re highlighting six YouTubers in different languages enjoying our game! - PONOS' announcement. 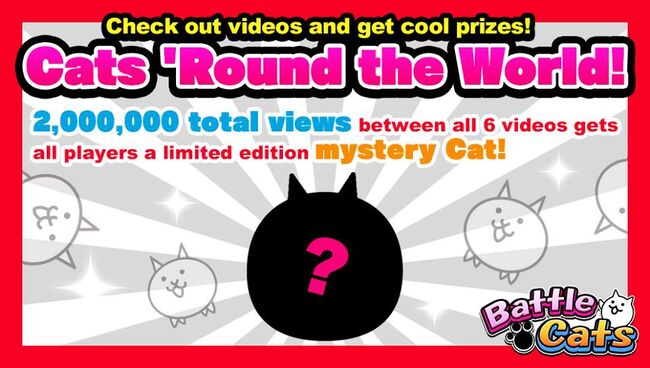 Cat 'Round the World! is a campaign held by PONOS on their official English Facebook Page. On weekend, 6 videos from 6 Youtubers in different languages are posted there. If the 6 videos reach 2 millions views or more, all players will receive a secret, limited Cat as a treasure drop in an event stage similar to We're Number One.

On August 3rd, 2017, PONOS created an announcement on their Facebook page, thanks to the popular Youtubers they chose, the total view count reach over 3 millions, all players can receive 1 Rare Ticket on August 6th and August 12th by log in, on August 16th, 2017, there is a special stage named Watch and Earn where players can unlock the mystery silhouette Cat. 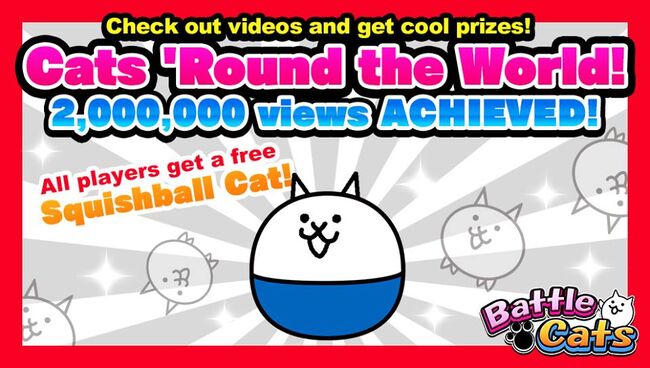 Retrieved from "https://battle-cats.fandom.com/wiki/Cats_%27Round_the_World!?oldid=132970"
Community content is available under CC-BY-SA unless otherwise noted.