Brave the big chill and get ready for the limited event Cats in the Snow!

Cats in the Snow (にゃんこ雪まつり, nyanko yuki matsuri, Cat Snow Festival) is the new Christmas Event that was added in December 2016.

SNOWBALL FIGHT!!!! Will your Cats be able to withstand the wintry assault?
Check out the Stories of Legend/Event Stages map Cats in the Snow during this event!
Brand new enemies are waiting for you! Can you topple Mammothe and the Icy Doges?! Win the day, and you can pick up Lucky Tickets that you can use at the special Capsule machine!

Clear later stages to get even better chances to pick up Tickets!

There is a Event-Stage during this event called "Cats in the Snow" that can be accessed in the "Start Fighting" button from the Stories of Legend menu. This event introduces 2 new enemies: Icy Doge and Mammothe. There are also Snowballs that fly at full speed to the Cat Base.

*The player needs to update Battle Cats app to the latest version (6.7.0) in order for this event to appear.

Get special Cats, items, and XP packs from these limited edition capsules!
Check out the Lucky Capsules section on the Cat Base menu to use your collected Lucky Tickets from the Cats in the Snow event! Plus, get a bonus Lucky Ticket along with any Rare Capsule draw!

*Any single Rare Capsule draw will grant the player one extra Lucky Ticket, while an 11-Capsule Draw will reward the player with a bonus 11 Lucky Tickets!
Once the Lucky Capsule event is over on January 9th, 2016, remaining Lucky Tickets will automatically changed to items. 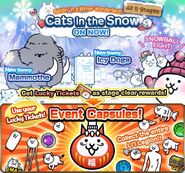 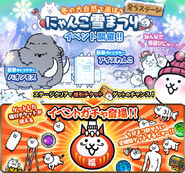 Add a photo to this gallery
Retrieved from "https://battle-cats.fandom.com/wiki/Cats_in_the_Snow_(Celebration_Event)?oldid=459862"
Community content is available under CC-BY-SA unless otherwise noted.