View source
watch 02:30
Dead Cells Final DLC - The Loop
Do you like this video?
Play Sound

The main gimmick of this saga is the introduction of "Starred" Alien Enemies, which are unaffected by the Aqua Crystal and Plasma Crystal Treasures from Into the Future. Starred Aliens have a 1,600% strength magnification by default, which can only be reduced by collecting the Treasures in Cats of the Cosmos.

As its name suggests, Cats of the Cosmos has the Cats invading the cosmos and encountering more Aliens, presumably using the rocket mentioned at the end of Into the Future. The ending reveals that the narrator of Cats of the Cosmos was Cat God and that the Cats and Aliens have discussed time travel, mind control and "all kinds of obscure technical topics" with each other. It also suggests moving onward to the realm of legend, referring to Legend Stages (although Legend Stages is unlocked earlier).

How many years had it been since the Great Cat War began? And yet, it feels like I never hear from you anymore. Not even on my birthday.

No words can express the awesomeness that is me.

I guess people are just afraid to get too close to true perfection?

But wait... I just thought of something!!

Could it be? Am I asking for too much from you, my lovely believers?

I heard that lately the most popular holiday destination is outer space. All the celebs are going.

For some reason everyone is totally fascinated with Alien fashion. It's the biggest fad of 20XX.

You didn't hear it from me, but the radiance of the Alien empire reaches even my neighborhood.

Well, those space guys still can't compete with my glory, of course.

It gets pretty exhausting, being followed around by crowds of stylish people begging for your attention. Such is my burden...

The question I get asked most: "Where are your trousers?" But telling would spoil the surprise.

Here's some big news. I just passed by the Cats who headed out into deep space.

They had some really important information for all of you.

Those Aliens... they're actually not such bad guys after all! They're just normal folks like you might run into in your hometown

Still, the Cats have to invade somewhere. And so, the next adventure of The Battle Cats begins now!!!

And so... The Cat Empire achieved total domination of the entire universe.

A splendid galactic federation by the Cats, for the Cats. The cosmos achieved total peace, and unlimited cat food for all.

... that's the official story, but the reality is a little different. Everyone's daily life didn't actually change one bit.

The one weird thing is that all constellations now look like cats. Cats, and only cats.

Or maybe its just me?

Actually, I was at a New Years Party for the Cat Army and Alien Empire. I only went to be polite, but...

These Cats and Aliens just turned their backs and ignored me, talking about time travel, mind control, and all kids of obscure technical topics. At some point, the world went blurry...

I must have had one seltzer too many

because when I came to I was alone.

Actually, I think that was nice of them not to wake me, because I felt very well rested for a week after.

I was free one Tuesday, so I went to the battlefield with the Cat Army to kill some time.

I haven't had such a good time since grade school gym class.

What, you believed me? Of course I'm not serious.

Well, as the Cat God, I can't just leave those guys to lose, right?

And you... you did great, kid. I'm going to grant your dearest wishes. No, not that one, you creep.

You'll see what I mean. Anyhow.

Onward... to the realm of legends!

Thank you for playing!!

This saga introduces a variant of the Aliens that can be identified by a yellow star badge on a part of their bodies. Even though they are categorized as Aliens, the Crystal Treasures collected in Into the Future don't affect them. They initially have a 1600% strength magnification. Collecting all Superior anti-Starred Alien Treasures in a Cats of the Cosmos chapter will reduce their stats by 500% each (1,600% - 1,100% - 600% - 100%).

For the full article, see Treasure.

This saga expands the series of "elemental" Fruit Treasures that increase the effectiveness of certain abilities against a particular type of enemy. Titanium Fruit (Metal), Antimatter Fruit (Zombie) and Enigma Fruit (Alien) are available to collect here as well as Treasure to increase XP earned, max Cat Energy and five sets of Treasure for weakening the Starred Aliens. The last Treasure on the list is the Mystery Mask, which is needed to weaken the final boss of each chapter.

This saga introduces the Warp, Warp Blocker, Barrier and Barrier Breaker abilities. Enemies with the Warp ability have a chance to bring one or a group of Cats they hit backward or forward a specific distance after an amount of time; Cats with the Warp Blocker ability will ignore this effect. Warped units will disappear from the battlefield until the warp duration ends, but still count toward the Cat Deploy Limit.

Enemies with the Barrier ability are able to ignore any damage that is weaker than the limit of their Barrier as well as any status effects that would be inflicted by those attacks. Each enemy has a Barrier with different limit and it is not affected by strength magnification. If a single attack deals more damage to a Barrier than the Barrier's health value (including additional damage from abilities such as Massive Damage or Savage Blow), the Barrier will break. After breaking the Barrier, the enemy is vulnerable to all attacks and status effects; Cats with the Barrier Breaker ability have either a percentage chance or are guaranteed to break Barriers, without having to deal higher damage than the Barrier limit.

The majority of the stages in Cats of the Cosmos have Battle Restrictions. Every 3 stages has different restrictions, with a few exceptions. The restrictions are as listed:

Chapter 1: Beyond the Exosphere

Chapter 2: The Passion of Catgod

Chapter 3: Even Stars Burn Out

Like all other main chapters, there are 48 stages, each with a Treasure to obtain. The 48 different stages are named after real stars, nebulae, planets, a black hole and some fictional planets.

Note: The Mystery Mask does not unlock a mysterious effect when the chapter is cleared, but rather weaken the chapter's final boss to 100%, as without it he will be buffed to 1100%.

The Cats of the Cosmos theme for the Main Menu

Full map of Cats of the Cosmos

Filibuster Invasion on the map

The Cat Base Menu in Chapter 1

The Cat Base Menu in Chapter 2

The Cat Base Menu in Chapter 3 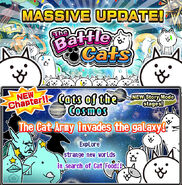