The Cerberus Kids (ケルベローズ Keruberōzu, "Ker-Bros") are an Aku variant of Those Guys that appears in Legend Stages and The Aku Realms.

Like Those Guys, their main purpose is to get in the way, as they have low base stats but are usually spawned en masse. They have a chance to Freeze units they hit for 4 seconds, which can be a problem, as they can prevent powerful units from shaking them off (them and other, more damaging enemies) once reached. Even tanky cats such as Dioramos may end up taking a knockback when reached despite their health, due to the inability to attack.

Treat them like a more annoying version of Those Guys. They are a simple peon that almost any attacker can defeat. The biggest hazard they have is their 4-second freeze, but their range is only 120 and their attacks are still single-target, so it shouldn't matter too much. If you are worried about it, however, use Cats with Freeze Immunity.

Waves are the best way to destroy swarms of them. 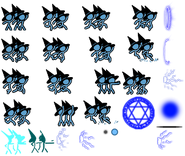