Chickful A has a 25% chance to freeze your cats, as well as high attack power and range, with decent stats all across the board. Her health is somewhat low, but that doesn't matter too much since she attacks too fast for most melee units to effectively reach her in time; this is more noticeable when there are two or more Chickful As de-synced.

Most mid-rangers such as Paris Cat and Macho Leg Cat will be outranged, but a Dragon Cat or Crazed Dragon Cat should be safe, and Long Distance Cats like Crimson Mina can hit Chickful As behind the backlines.

Rushers such as Butterfly Cat, Awakened Bahamut Cat and Maglev Cat are still usable against her, but need good timing to land a hit. Rushers will work a lot better if they have enough time to knockback Chickful A before she attacks if timed well. This way, they won't get hit by Chickful A in the process and be able to (hopefully) defeat her in one go.

In Nyanko Defence Force, Chickful A made a cameo appearance as a stone carving in one of the backgrounds. 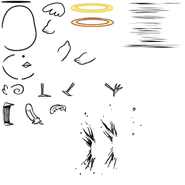 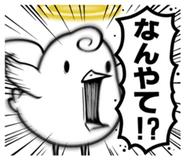