Cute cyber girls dressed in Christmas costumes only during this limited event. When players move to the Rare Cat Capsule screen, "Christmas Gals" (クリスマスギャルズ kurisumasu gyaruzu) event has been held.

During this event, a new special stage can be seen: "赤鼻サンタのプレゼント" (Akabana santanopurezento, Present of red-nosed Santa)

In this event, a new enemy - Blitzen - makes an appearance.

By clearing the stages, players have a chance to unlock the Rare Cat "A Gift of Cats" at extremely high probability. The higher difficulty stage cleared, higher chance to get this Cat, but players can use Treasure Radar to get it in one shot. 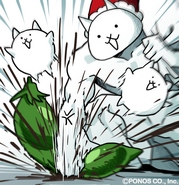 by たっぷる
Add a photo to this gallery

Retrieved from "https://battle-cats.fandom.com/wiki/Christmas_Event?oldid=489492"
Community content is available under CC-BY-SA unless otherwise noted.