Chronos the Bride is an Uber Rare Cat that can be obtained by playing the Rare Cat Capsule during the June Bride event. She was added in version 11.6 and is a variant of Empress Chronos.

Evolves into Wedding Chronos at level 10.

Chronos the Bride has good stats as a long-distance unit as with regular Empress Chronos, with both having above-average HP, DPS, and especially pierce. Along with her regular attack, the wedding variant also has a miniwave with a 20% activation chance on each individual hit and a 49% activation chance on Chronos the Bride' entire attack, though this only increases her DPS by 7%.

Chronos the Bride' main gimmick is that she has a chance of cursing, slowing, and weakening enemies rather than freezing them. The chances of a single hit and her entire attack inflicting at least one of these statuses are 88% and nearly 100% respectively, though if you only consider slow and weaken, those chances become 75% and 98%. Her miniwave, though rare, can also apply these effects inside of her blindspot, which could help when a melee enemy is dangerously close. Here is a chart to find the probability of effects happening in Chronos the Bride's attack cycle:

Despite Chronos the Bride' seemingly good proc chances, she has a major flaw: her low-duration, individual effects cancel out longer effects from other units, making her very difficult and counterproductive to use with units with longer effect durations such as Kinrangers and Mitama the Oracle. This makes her most favorable synergy be, quite fittingly, with original Chronos, as neither disturbs the other's effects. It's a similar case with other freeze crowd-controllers that may need additional support. Still, her attacks can snipe and impede backliners with effects such as Professor A. and Angelic Sleipnir since she can both disable their effects and halt their progress for a short time.

*First stats are 1st form's initial; other stats include 300% Empire of Cats Treasures; recharge time may vary.
*Time between attacks is the time from the attack's execution to the start of the next attack (includes backswing).
*For units with multi-hit attacks, attack animation is the part of the animation leading up to the first hit.
*Fruit Treasures not included.
*See this section to calculate Chronos the Bride's stats. 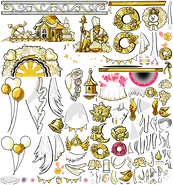