Citrouille is a Super Rare Cat created by a collaboration event between Merc Storia and Battle Cats and can be unlocked by rolling the Rare Cat Capsule during the event period.

Evolves into Citrouille CC at level 10.

Citrouille's generalist stats are rather underwhelming, so he should only be used for his niche.

With a chance of knockback or slow against Red and Black enemies, Citrouille is immediately comparable to Witch Cat, Pirate Cat, and Tin Cat. While these Cats are generally more spammable and attack more frequently, Citrouille's area attacks and range give him an advantage over all of them. In spammy stages, this advantage can be quite useful, especially since a stack of Citrouille can both knockback and slow. However, since each status effect only has a 30% chance, Citrouille is not reliable outside of a stack, even with his area attacks. Outside of spammy stages where area attacks are needed to control crowds, Citrouille is outclassed by the aforementioned Cats.

*First stats are 1st form's initial, second and third stats include 300% Empire of Cats Treasures; recharge time may vary.
*Attack frequency is the time between an attack is delivered and the next.
*For units with multi-hit attacks, attack animation is the part of the animation leading up to the first hit.
*Fruit Treasures not included.
*See this section to calculate Citrouille's stats. 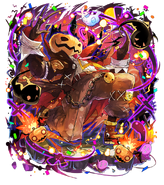