SoL: Sub-chapter 36 - Greeter at the Gates

Coffin Zoge can't burrow, but can revive an infinite amount of times, making it an annoying wall, especially in its first appearance paired with Dark Emperor Nyandam and Tackey.

When facing a horde of Coffin Zoges, it's a good idea to use Area Attackers (preferably with Zombie Killer) to extinguish them quickly. If you kill them individually, it will be difficult to push past them because the previous Coffin Zoge usually revives before you can kill the next one. You could though, use Coffin Zoge to clog the enemy limit to prevent even more dangerous enemies from spawning, which is required in Veggie Friends and Forever Fishing. 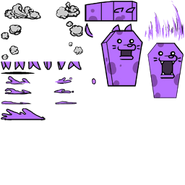