For the enemy encountered in the Merc Storia Collaboration Event, see Cornelia (Enemy).

Cornelia is an Uber Rare Cat created by a collaboration event between Merc Storia Collaboration Gacha and can be unlocked by drawing the Rare Cat Capsule during the event period.

Evolves into Cornelia CC at level 10.

Cornelia is a boring Uber. Her stats are somewhat low, and her niche is very plain, but she does have the saving grace of a low cost and quick cooldown. Against Red enemies, she’s a useful as she is against traits outside of her niche. The freeze can counter only the most basic Red enemies. She can pack a slight punch, and you don’t have to worry about losing ground, but that’s kind of it.

Against Black enemies, her freeze is even more worthless, but her general playstyle allows her to be a good counter to any non-backliner black. Case in point, she has a quick attack rate and moderate range. She can keep Black enemies knocked back like it’s nothing. She’s also extremely affordable, so that’s a nice addition to everything mentioned so far.

Her play style also caters towards Zombies, as she’s very cheap and speedy, but she's not traited against Zombie enemies, so only user her as a last resort.

Anywhere else, it’s the same thing as if she were facing Red enemies, just without a freeze chance. Pretty weak, but can cover ground. The best comparison to make to her would be Valkyrie Cat. She has similar procs and chances, but fewer targets in exchange for better stats. Her generalist may or may not be better depending on how you use her. Overall, Cornelia isn’t too bad, but she’s painfully mediocre. Better than most collab Ubers come, but still not worth any trouble.

*First stats are 1st form's initial, second and third stats include 300% Empire of Cats Treasures; recharge time may vary.
*Attack frequency is the time between an attack is delivered and the next.
*For units with multi-hit attacks, attack animation is the part of the animation leading up to the first hit.
*Fruit Treasures not included.
*See this section to calculate Cornelia's stats. 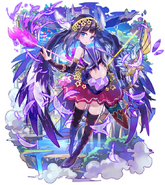