Crazed Baozi Cat is a Special Cat that could be unlocked in August 2016 via entering the code "狂亂小籠包" ("frenzy dumplings") in a website. It is exclusive to the Taiwanese and Switch versions of The Battle Cats. As of now, it can be obtained during the second anniversary event of BCTW (21st July) or during the New Year celebration event every year as a login prize.

Very similar to Cat in terms of usage. Cheap and expendible, it can be summoned in masses to take hits in place of other, important units. This meatshield role is quite valuable, if not for the wide selection of cats able to perform this role without relevant differences in quality. Crazed Baozi Cat, however, can be used in 4-crown Legend Stages, where there is considerably less competition, plus it has a lead on most other meatshields thanks to his speed, which make him one of the best options, despite the low stats.

Due to the low stats, this form is not recommended as it is considerably worse than any possible alternative in about every way, making him into a waste of money when summoned. Could still be of use in early-mid Empire of Cats, but, after that, it is best to revert this cat to Normal Form and only use that.

*First stats are 1st form's initial, second and third stats include 300% Empire of Cats Treasures; recharge time may vary.
*Attack frequency is the time between an attack is delivered and the next.
*For units with multi-hit attacks, attack animation is the part of the animation leading up to the first hit.
*Fruit Treasures not included.
*See this section to calculate Crazed Baozi Cat's stats. 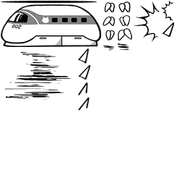