Crazed Cats are a group of Super Rare Cats that are unlockable by clearing their own Insane-labeled stages, which appear once a month. Their release date is April, 2014 BCJP.

About the Crazed Cats

Crazed Cats are enhanced versions of the Normal Cats the player obtained in early Empire of Cats. At the same level, Crazed Cats always have better stats when compared with their Normal Cat cousins. Not only health and attack power, but the Crazed Cats also have other statistics as well, such as additional abilities, speed or reduced summoning costs.

There are some downsides, as the Crazed Cats can only be leveled to level 20 at first, and require specific User Ranks to be upgraded further to level 30. As of the Version 9.1 Update, their current level cap is 50 using Catseyes, and some lack their Normal counterpart's abilities.

In the Version 5.0 Update, the True Forms of Crazed Cats were implemented and a series of Deadly Stages were also added. 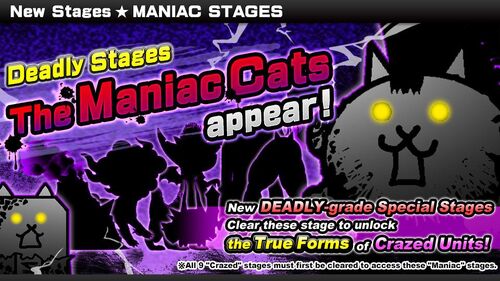 The player needs to get all Crazed Cats to play these stages. They are rated Deadly difficulty and have the same schedule as the regular Crazed Stage. The player is guaranteed to unlock their True Form upon completion. Battle formation is similar to regular stage. However, enemy magnification is higher and more difficult combination of foes, as well as the user not being able to continue the battle once they lose.

Crazed Cats gains 1/5 stats buff from level 1 to 20, they gain a 1/10 buff between level 21~50, their stat buff decrease is at a low level in order to prevent them from becoming too overpowered because of their high initial stats.

to add: stats table (the new one) for each Crazed.

These are the minimum Normal Cat (True Form) levels required to surpass the Health and Attack Power of the corresponding Crazed and Manic Cats at the levels indicated.

* Manic Macho Legs has a 100% shockwave attack which effectively doubles single target damage, making it a much stronger cat than the table suggests.
example - Normal Island Cat (True Form) has to reach level 20+62 before it exceeds a level 40 Manic Island Cat's Health and Attack Power.

Based on the level information in the table above, the following table derives a Normal Cat (True Form) 'value' for each Crazed/Manic Cat at the level shown.
In effect how many (True Form) Normal Cats, at the same level as the corresponding Crazed/Manic Cat, would be required to provide approximately the same health and damage effect, against a single target.

These stages appear once a month, on the 3rd, 6th, 9th day and so on. At the end of a month, a Crazed Festival is held, where 3 Crazed Stages are available at once for one whole day. The same for Manic Stages, the player must beat all Crazed Stages to play them.

Please note that these suggested stats are NOT ALWAYS what you will need; You could have Level 20+0 Normal units and still win if you have the right strategy.