Crazed Gross Cat (狂乱のキモネコ Kyōran no Kimo Neko, Frenzy Gross Cat) is a Traitless enemy that first appears in Festival Gross, where it can be unlocked as a Cat Unit.

It has extremely short ranged attacks, but makes up for it with the ability to spawn level 3 Wave Attack at a 100% chance. Treat him as a stronger Kory with less standing range that spawns in mass. Do note that the Crazed Gross's Wave Attack reaches a range of 800, meaning only a few cats like Nerd Cat can avoid the attack.

If you have Awakened Bahamut Cat, this enemy becomes a cakewalk. It can also be made a cakewalk using any Wave Blockers, notably Octopus Cat, in combination with tough, durable meatshields such as Crazed Wall Cat.

Alternatively, you can avoid meatshields and use plenty of ranged attackers, such as Dragon Cat or Paris Cat, as these will eventually stack up and knock this enemy back before it can even attack. 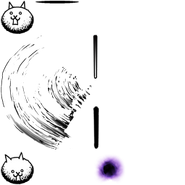