Curling Cat is a Rare Cat can be unlocked when beating the stage Parade of the Dead appearing on the 3rd, 4th, 17th and 18th of every month. True Form added in Version 8.8 increases its health and movement speed.

Evolves into Zamboney Cat at level 10.

Evolves into Green Shell Cat when obtained from March to Death (guaranteed to drop) and is level 20 or above.

The god of early-stage stalling, Curling Cat can rush to the front lines and tank any hit. It works very well at the start of a battle, where enemies tend to be weak or limited, as it only attacks once every 4 minutes and 27 seconds and thus gives the player ample time to build up money. It can also be used to great effect against long-ranged enemies when supported by Long Distance cats, being able to stall the foes in Floor 39 almost on his own, or it can hold a heavy pusher in place for an attacker to land a hit, for example, to allow Crazed Moneko to land a hit on Super Metal Hippoe or Sir Metal Seal, which is usually not possible without assistance due to how hard they push and with her long attack animation.

Green Shell Cat is a straight improvement over his other forms. Thanks to his extra movement speed and health, it can be relied upon much more; it has a much better chance of stalling a group of enemies early in a stage, making it possible to summon another when one dies in many instances where it was not possible. Despite the difficulty of the stage it is obtained from, it is recommended to unlock this form as soon as possible if you cannot get Zamboney Cat to work in a stage where you need him, such as some appearances of Professor A. in 4 crowns Stories of Legend.

*First stats are 1st form's initial, second and third stats include 300% Empire of Cats Treasures; recharge time may vary.
*Time between attacks is the time from the attack's execution to the start of the next attack (includes backswing).
*For units with multi-hit attacks, attack animation is the part of the animation leading up to the first hit.
*Fruit Treasures not included.
*See this section to calculate Curling Cat's stats.

Green Shell Cat can be found as a common enemy. 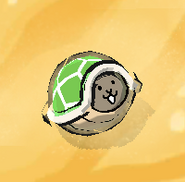