Dark Aegis Garu is an Uber Rare Cat that can be unlocked by playing the Rare Cat Capsule during the EPICFEST or SUPERFEST events. It was added in Version 10.5.

Dark Aegis Garu is an interesting unit, similar to normal Garu like all EPICFEST units are to their UBERFEST counterparts, but still has mostly different usage and an extra ability only gained in his Evolved Form.

Although seeming much better than Garu at first glance, he still shares many of the same weaknesses: High cost, egregiously long recharge time, slow movement speed, a long attack animation and slow movement speed, along with no immunities apart from Immune to Waves like some other tankers.

His usage against Traitless enemies varies a lot, notably the best he works against are the weaker ones that are encountered early on in the game, such as Jackie Peng, Hippoe, Le'boin and the like, but those don't matter too much in the grand scheme of things. Generalist value for Dark Aegis Garu is explained more in-depth below, but note that normal Garu still has more generalist usage than Dark Aegis Garu against Traited enemies.

For generalist usage, treat him similarly Maeda Keiji or Baby Cat, as he has generally similar features to them, while outdoing some of the thing Baby Cat can do, and nearly everything Keiji can do, with the added benefit of being useful without a True Form, as Keiji and Baby Cat are not good until true form. However, his recharge time for a mid-ranger makes him fall behind said Ubers. This can luckily be fixed by getting him to level 40, allowing him to be used safely as an occasional replacement.

At level 50, Dark Aegis Garu will be able to do over 10,000 DPS unstrengthened! You will not regret investing into him. Again, he’s still very hard to use over Cats in the Cradle and Immortal Keiji, and it’s all because of his long recharge and monstrous cost. Luckily, you can potentially be rewarded for your risks.

Against some Traitless enemies Dark Aegis Garu can do very well against, like Dolphina, Dober P.D, Kory, Master A., and Mr. Mer. However, the main problem with some of these enemies is the support they usually come with. For example, R.Ost or Dober P.D usually never come with purely Traitless support, which wraps back around to Dark Aegis Garu's decreased general usage.

*First stats are 1st form's initial, second and third stats include 300% Empire of Cats Treasures; recharge time may vary.
*Attack frequency is the time between an attack is delivered and the next.
*For units with multi-hit attacks, attack animation is the part of the animation leading up to the first hit.
*Fruit Treasures not included.
*See this section to calculate Dark Aegis Garu's stats. 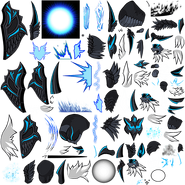