This article is about the enemy. For the Cat Unit, see Dom Cat (Special Cat).

This enemy is a force to be reckoned with: she has huge amounts of health, great DPS and only a few knockbacks. Thankfully she is considered a Black enemy, which means she can be affected by the abilities of anti-Black Cats.

Pizza Cat is a good Cat to bring up against this Enemy. Don't try to use Bombercat to freeze her, as Bombercat is outranged. Several anti-Black Ubers also work well against her, as well as good generalist Ubers and Ururun Wolf. 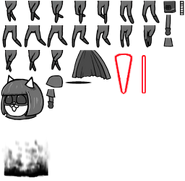