Dioramos is an Uber Rare Cat that can be unlocked by playing the Rare Cat Capsule during the Lords of Destruction Dragon Emperors event. True Form grants improved attack power, range, health, the Barrier Breaker ability, and increases knockback and slow chance to 100%.

Dioramos' great HP, DPS and the ability to knockback and slow angels makes him a Tanker, Crowd Controller and Backliner in one, but he's held back by his slow speed and skyhigh cost. Although Dioramos has massive HP, he should still be protected properly like any other Uber. On another note, his HP can come into play when enemies push, stalling them for a while. Aside from that, his attack deals enough damage to knock many pushers back, prolonging his life, especially against Angels.

Dioramos' Slow Immunity helps against enemies such as Queen B, Croakley and Daboo of the Dead, ignoring their effect and proceeding towards them. Although his slow movement speed is a drawback in many occasions, it can be an effective tool on Zombie stages: while the frontline makes the Zombies burrow, Dioramos can pick them off once they resurface, note that this is rarely useful except for stages like Parade of the Dead.

God-Emperor Dioramos gains increased stats, guaranteed Knockback, Slow & Barrier Breaker. Besides range, all boosts have improved his overall performance by a decent margin. He can now consistently control his targets, especially those with high pushing power like Angelic Sleipnir, Angelic Gory, Boraphim, Divine Cyclone and Winged Pigge, or do a rather good job as a tanky generalist. God-Emperor Dioramos shines against Youcan and St. Dober, having stats and abilities to greatly reduce their threat. Besides Youcan though, he falls back compared to many other Anti-Alien units, so using him against Aliens is not recommended.

From all of God-Emperor Dioramos' Talents, Strengthen seems the most promising, giving 50% more damage at half health, which should synergise well with his gargantuan health. However, Dioramos has only two knockbacks, which means for his Strengthen to activate, Dioramos must be at his last knockback. This is worsened by Dioramos' very long foreswing. In non-Angel stages, Dioramos might not contribute enough extra damage before death to justify the NP cost so it is better spent elsewhere. Weaken Resist is made to counter Winged Pigge, but even at max upgrade, Dioramos will still get perma-weakened by her. Not worth the investment. Freeze Resist and stat increases are alright, the former makes Dioramos usable in stages with Henry, while the latter grants Dioramos quite the boost.

*First stats are 1st form's initial, second and third stats include 300% Empire of Cats Treasures; recharge time may vary.
*Time between attacks is the time from the attack's execution to the start of the next attack (includes backswing).
*For units with multi-hit attacks, attack animation is the part of the animation leading up to the first hit.
*Fruit Treasures not included.
*See this section to calculate Dioramos's stats. 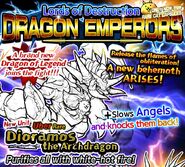