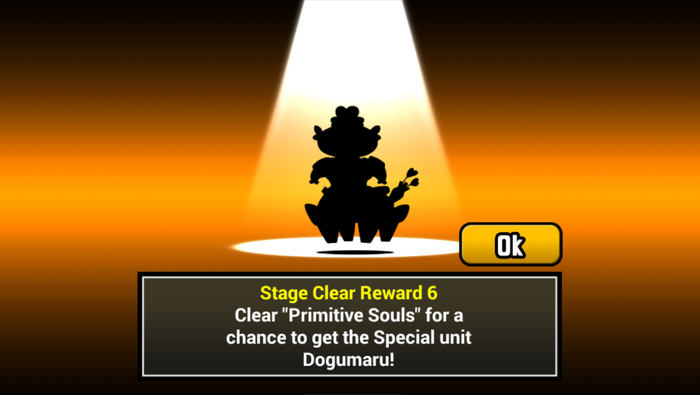 This article is about the Cat Unit. For the enemy, see Dogumaru (Relic).

Dogumaru is a Special Cat that can be unlocked at a 3% chance when beating Primitive Souls.

Evolves into Doguemon at level 10.

+ Resistant to Traitless enemies
+ Immune to Warp and Curse

Dogumaru is an anti-Traitless tanker. His points of interests are his fast movement speed, high attack power, low knockback count and cost, with the addition of curse and warp immunity. His Warp Blocker makes him ideal for Mystic Mask Yulala in particular, but he falters against enemies like Henry or Croakley who will render him useless if spawned at the wrong time. Lastly, he also excels at tanking isolated Dolphinas.

*First stats are 1st form's initial, second and third stats include 300% Empire of Cats Treasures; recharge time may vary.
*Attack frequency is the time between an attack is delivered and the next.
*For units with multi-hit attacks, attack animation is the part of the animation leading up to the first hit.
*Fruit Treasures not included.
*See this section to calculate Dogumaru's stats.

Dogumaru on the Heart of Clay Meow Medal