Dolphina (イルカ娘 Iruka Musume, "Dolphin Daughter" or "Dolphin Girl") is a Traitless enemy that appears in Legend Stages and The Aku Realms.

This enemy has powerful Long Distance attacks that can reach to 350~650 but has merely 150 standing range, which is well within her blind spot. Dolphina also possesses 450k health and extremely fast movement speed, and is nearly always seen in groups. This may all sound insane for an enemy of this caliber, but fortunately she has 30 knockbacks.

Dolphina's many knockbacks can dramatically increase her survivability, so units with high damage per hit are preferred in most stages. Use strong attackers with short enough range to enter her blind spot, like Dancing Flasher Cat or Crazed Sexy Legs Cat. The best strategy against Dolphina is to use "ranged meatshields" or few or no meatshields and attackers with short range or short attack animations. Saber is ideal against Dolphina, as long as you don't spawn any meatshields as long as she is outside of Dolphina's effective range.

Rushers such as Awakened Bahamut Cat, Li'l Valkyrie, Maglev Cat are best used without meatshields. You can also use tanky units like Artist Cat, Jamiera Cat and Crazed M. Titan Cat to get into Dolphina's blind spot as they will take full advantage of her 30 knockbacks.

It is most preferable to use slower meatshields, but only if they can tank at least two hits. This stops Dolphina's attack from being triggered too quickly, similarly to a strategy used against Lord Gravey and Miss Haka, and this gives your cats more time to deal damage to knock her back. If she has support enemies such as the Master A. and Rain Ds in No Return Flights, it is best to either use mid-range cats with high health or spammable mid-range units so they can stack enough to prevent the Dolphinas from ever attacking, which can quickly cripple a stack of cats. Wave Attackers and Surge Attackers can also be very effective. 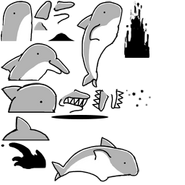