Duche has decent HP, but his low damage and lengthy backswing make him pretty easy to stall. Therefore, Duche mainly serves as a tank to protect stronger enemies, such as Master A..

Send meatshields to stall him out (which should be easy considering his low damage) while slowly stacking heavy hitters to take him down. Duche isn't much of a threat on his own, so in most stages he isn't the one you should really be worrying about. 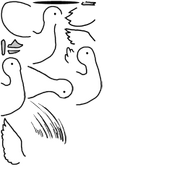