Ecto Doge is one of the Ghost Masters (ゴーストマスターズ Gōsutomasutāzu) that are introduced in Ghostly Houseguests. It also appears in The Haunted 1LDK, the final stage of Mouseyland.

Dad's back to haunt us

Ecto Doge is the Floating variant of Doge, and it is two times more powerful in terms of health and damage. It's still a very weak enemy, though.

Since it is still much like the regular Doge, almost anything can kill it with ease.

Ecto Doge makes a cameo appearance in Go! Go! Pogo Cat, along with Pigeon de Sable and Brollow. It is the latest occurring of the three, and can only be seen drifting through the background after the 20th checkpoint is reached.

Ecto Doge takes on two different forms as traps in The Burgle Cats. 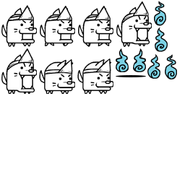 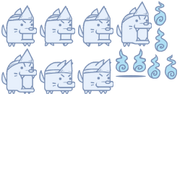