This article is about the Cat Unit. For the enemy, see Ultima Beast Naala (Relic/Behemoth).

Elder Beast Naala is a Special Cat that can be unlocked at a 3% chance when beating Immortal Zenith (guaranteed if a Treasure Radar is used).

Naala's unique way of attacking may seem hard to understand, so here's how it affects its performance:

Overall, it's like a normal attack with the chance to miss enemies and 1/3 the power outside of bases.

While Naala technically has 15,031 DPS at level 30, in practice it will "only" be 5,010, which is still very good for a Long Distance attacker. The cost is its short standing range: most mid-ranged enemies can easily get the first hit on Naala, meaning that it has to rely on a stepping stone to safely snipe them. Even worse, it only has 1 standing range against enemy bases which means it can get easily ambushed by spawned enemies without even having protection from meatshields. Still, its high health and immunities give it some usage in 4-Crown Uncanny Legends; plus, standing that close to bases with few knockbacks has some potential for cheesing stages, as any non-boss enemy that spawns would not get in front of the base until Naala is half-dead, allowing DPS units that suffer from short range and/or Single Target to safely whale on it for a short while.

*First stats are 1st form's initial, second and third stats include 300% Empire of Cats Treasures; recharge time may vary.
*Attack frequency is the time between an attack is delivered and the next.
*For units with multi-hit attacks, attack animation is the part of the animation leading up to the first hit.
*Fruit Treasures not included.
*See this section to calculate Elder Beast Naala's stats. 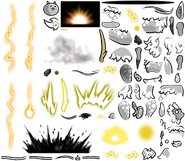