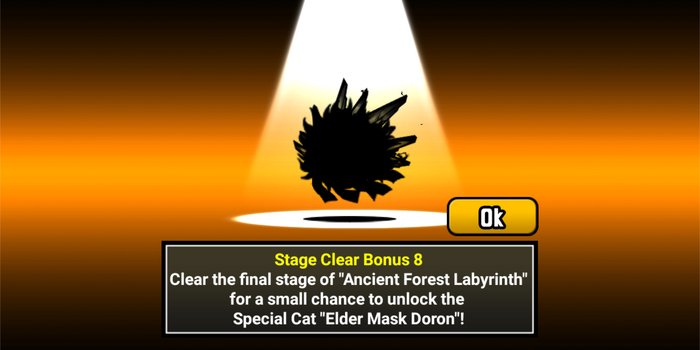 This article is about the Cat Unit. For the enemy unit, see Elder Flame Doron (Relic).

Elder Mask Doron is a Special Cat that can be unlocked at a 3% chance when beating The Face of God (guaranteed if a Treasure Radar is used).

Like Glass Cat, Elder Mask Doron is a suicide attacker that delivers a crowd-controlling status effect (in his case a 5-second freeze), giving other (especially fragile) units an expanded window of opportunity. Thanks to this, rushers like Idi:N2 and Awakened Bahamut can inflict much greater damage against relics that they normally wouldn't be able to due to the trait's generally high damage. Unlike Glass Cat, however, Doron can also deliver decent damage himself, as well as being able to hit multiple targets with his omni strike and surge. Keep in mind that the Surge is likely to hit backline enemies, due to its spawning range of 400~1,000.

It is not recommended to use him on non-Relic enemies because of his long recharge time and mediocre damage, with or without Surge, as Doron is heavily reliant on his status effect and the resulting potential synergy with other units.

*First stats are 1st form's initial, second and third stats include 300% Empire of Cats Treasures; recharge time may vary.
*Attack frequency is the time between an attack is delivered and the next.
*For units with multi-hit attacks, attack animation is the part of the animation leading up to the first hit.
*Fruit Treasures not included.
*See this section to calculate Elder Mask Doron's stats.