Evangelist Cat is an Uber Rare Cat that could be unlocked from a time-limited event (Korean Version only) at a 10% chance or by using a serial code found on PONOS employees' business cards. It is now unobtainable in the mobile versions because serial codes can no longer be input to the game, but in the Nintendo Switch version it drops after beating the Cats of the Cosmos Chapter.

Evolves into Filibuster Cat at level 10.

With his ability and weak stats, Evangelist's main purpose is to briefly stop a group of enemies, which is helpful against groups of enemies with high DPS, like Crazed and Awakened enemies, provided you have a serious defense setup. As his stats are so terrible even at level 50, Evangelist needs proper meatshielding to protect him. Due to his long recharging time, it's rare to see a second Evangelist during a battle.

Due to having low survivabulity and no immunities, it is highly inadvisable to use him against Mini-Wave, Wave, or Surge enemies. However, he is mostly safe from all but the longest-reaching ones, due to his insane range of 1,000.

*First stats are 1st form's initial, second and third stats include 300% Empire of Cats Treasures; recharge time may vary.
*Attack frequency is the time between an attack is delivered and the next.
*For units with multi-hit attacks, attack animation is the part of the animation leading up to the first hit.
*Fruit Treasures not included.
*See this section to calculate Evangelist Cat's stats. 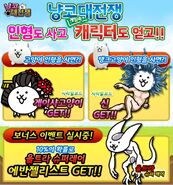