Filibuster Obstructa will always destroy the Cat Base in one hit and can reach it no matter how far away he is. Your goal is to prevent him from ever completing his attack animation.

His attack animation is 40 seconds long and he has 200 knockbacks, making it fairly easy to interrupt him, as only 10,000 damage is needed to trigger a knockback. The problem lies in his immunity to the Cat Cannon and Wave Attacks, not to mention his massive range, which makes him hard to reach with all kinds of enemies in front of him. 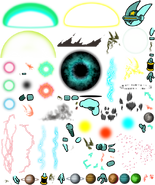