Battle Cats Wiki
Register
Don't have an account?
Sign In
Advertisement
in: Traitless Enemies, Enemy Units, Cats of the Cosmos Enemies,
and 6 more

For other uses, see God.

This is the weakest version of Cat God in terms of HP. He has only 1 million HP, while maintaining the same knockbacks as his other variants. However, this Cat God is more support-oriented, because his main ability is to generate a Lv.12 Wave Attack that warps every cat it hits back 1,500 range, letting the peons destroy the Cat Base or letting him advance to destroy the base with his final strike.

The Mesocosmocyclones will teleport your cats forward to let Giga-God generate his warp wave attack and let the peons push to your base, but you can send weak meatshields or cats with the Warp Blocker ability to be knocked back instead of being teleported forward by Mesocosmocyclones to avoid generating the wave. Catellite is not the best at doing this due to his one knockback, but can instead stall the Mesocosmocyclones.

Another way to deal with his wave is staying near your base. While he teleport some cats, fast meatshields like Manic Mohawk or Manic Eraser can reach Giga-God before he finishes his animation shortly after they leave the base, stalling him pretty successfully.

Rush units with no foreswing like Maglev Cat and Awakened Bahamut are pretty effective here, because they will be teleported after dealing some damage and they can attack again once they are teleported back, dealing continuous damage until they die. 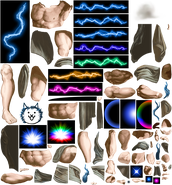