Gamatoto Expedition (ガマトト探検隊 Gamatoto Tanken-tai, Gamatoto Expedition Troops) is a feature added in Version 5.0 of Nyanko Daisensou and The Battle Cats which enables players to send a "cat" named GAMATOTO on expeditions in search of useful items. GAMATOTO allows players to obtain free XP, Cat Food, Catseyes, etc. without doing anything else. This feature is unlocked after clearing Greece/Shiga in Empire of Cats.

GAMATOTO has many costumes; however, they are only cosmetic. They have no effect on his chances of finding items during expeditions, regardless of which costume is worn.

The expedition screen can be accessed from the Cat Base Menu after selecting a chapter. The button is located in the same row as the Menu and Missions buttons. This screen is also where the Cat Shrine is found.

You can start an expedition by tapping GAMATOTO on the center of the screen. The upper-right button toggles a reminder that GAMATOTO has completed the expedition and returned to camp. The shop button is a shortcut to buy items in the premium shop, where players can buy Catamins to reduce the time remaining before GAMATOTO returns to camp.

An expedition can be made to one of several areas if they're unlocked for a chance to obtain the rewards specified. There are three expedition duration options. These various locations and durations determine the number of expedition points GAMATOTO receives towards his next level, the average number of items he acquires and, depending on where it's held, what those items are.

Each area has specific requirements for GAMATOTO's level and the player's User Rank. All the requirements specified must be met for an area to be unlocked and available to explore.

Once GAMATOTO's expedition is confirmed, a window will display the details of the mission, location, type, duration, a countdown of time remaining to completion and options to reduce the countdown timer by using Catamins. A Catamin [A] skips 1 hour of the expedition, a Catamin [B] trims 3 hours off, and a Catamin [C] is effective for 6 hours, the maximum length of an expedition.

There is also a small home icon button above GAMATOTO which cancels the expedition.

Warning: Cancelling a Gamatoto expedition returns him to base and forfeits any rewards he might have obtained; any Catamins used will not be returned. A lack of wireless connection gives the impression of "freezing" GAMATOTO. Reconnecting will update his progress correctly and fully.

Cancellation via the 'home' button also provides a further confirmation stage and once confirmed will then be completed instantly.

How to Start an Expedition 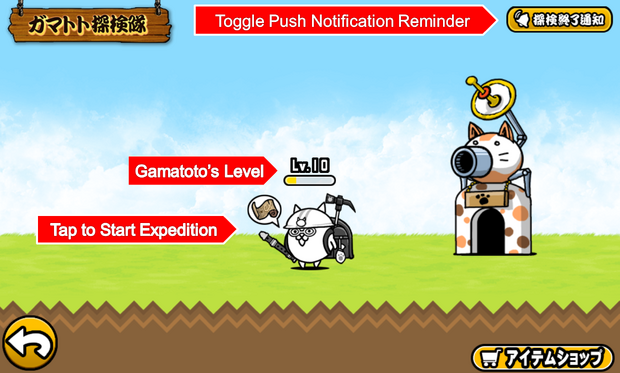 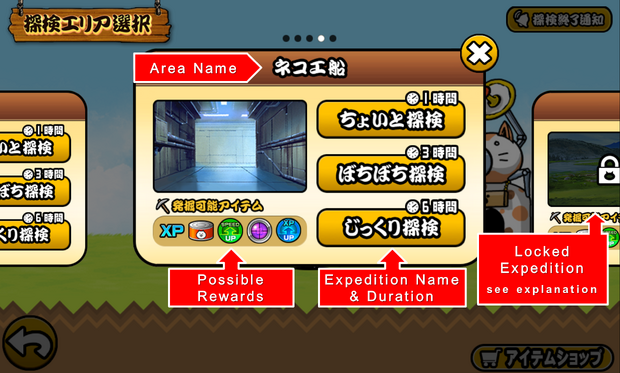 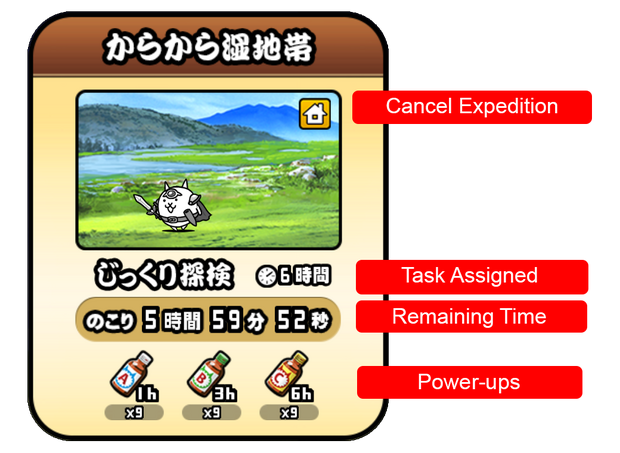 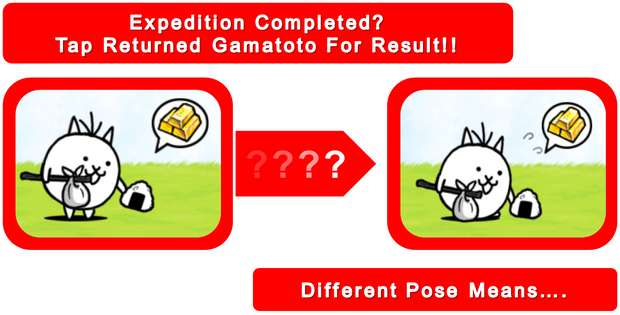 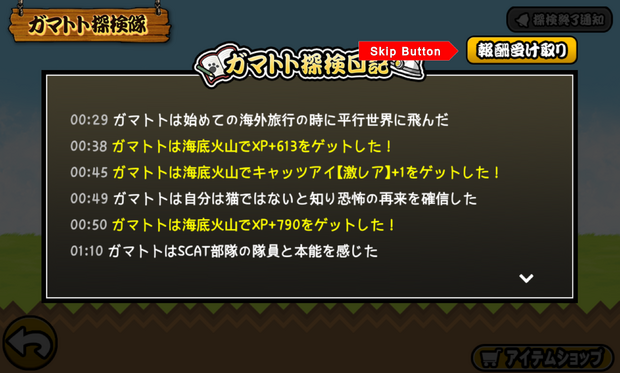 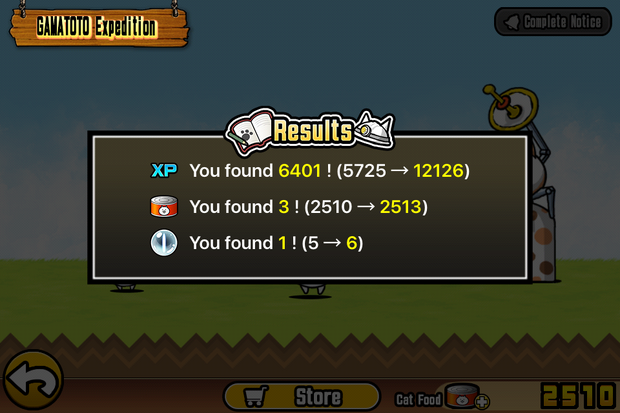 Please note: GAMATOTO's level does not affect the drop amount nor drop rate of XP, Cat Food or other items. The area, however, does affect the average amount of XP or Cat Food that can be obtained. You also have to unlock the previous area before being able to unlock ones after.

After each expedition, GAMATOTO has a rare chance (about 5%) to meet a fellow friend during the expedition which joins after the expedition ends. These are called "Expedition helpers" and take the form of smaller versions of GAMATOTO. Every helper gives a small boost to the drop rate of items in each expedition.

Helpers come with randomly generated names each. There is a maximum of ten (10) helpers a player can only have and the player can not have more until at least one retired. GAMATOTO can return with an eleventh helper but expeditions cannot take place until there are ten or less. By tapping on the helpers in the field, you can find the details of the helper's name and effect description, how many helpers you have and the dismiss button.

Dismissing a helper will allow them to be recruited to the Ototo Corps as engineers, for use on Cat Base upgrades. Note that engineers can only be used on one upgrade, however.

When the player has a good enough Cat Fortune (Li'l Luck or greater), there is a chance to summon Inari, who directly doubles all item rewards except for Cat Food at the end of an expedition, rather than increase the probabilities. Inari behaves like a regular helper for the rest, but doesn't count toward the helper limit. However, Inari will only stay for one expedition.

During certain collaboration events, a character from the collab will assist GAMATOTO in the same way as Inari, but with no limit to how many expeditions they stay for. The temporary helper will disappear once the collab ends.

After each expedition, there is a chance for players to find an item pack in the field. By tapping it, the player will be given a reward and an extra option to watch online ads for extra Cat Food, Catseyes and materials. If the player declines, a Doge steals the item pack.

After drawing a fortune slip from the Cat Shrine, a lucky player may find a "Great Fortune", which is a large Item Pack marked with The Cat God's darkness-concealed face. (Item Packs start appearing at User Rank 1600; before that, a single can of Cat Food will be there instead.)