Gauntlets, or Assault Stages (強襲ステージ, Kyōshū Sutēji) in the Japanese Version, are a type of event introduced in the Version 9.3 Update.

A Gauntlet is a map containing up to 20 No Continues levels that can drop rewards such as Battle Items, Catfruit, Tickets, Catamins, Materials and Leaderships when completed for the first time. After beating three stages of a Gauntlet, the map will be on standby, becoming inaccessible for 30 minute per completed stage. The cooldown can be shortened by 30 minutes with each Catamin A.

In most Gauntlets, all levels play out the same, but the strength magnifications and enemy base's HP are increased with each level. Gauntlets also tend to have enemies with separate health and attack magnifications.

Similarly to Heavenly Tower and Legend Quest, all progress made in a Gauntlet will reset when the event ends, allowing the player to collect the rewards again once the event returns.

The main Gauntlets don't follow any specific schedule, and can only be played after clearing Into the Future Chapter 3. Each contains a unique boss with two types: a regular trait and Colossal, a special type that makes them weak to Colossus Slayers. There are two sets of enemies per Gauntlet, one for Lv.1~10 and another for Lv.11~20.

Beating the stages in these Gauntlets may give you the chance to play one of three Continuation Stages that can drop Strong Up, Resistant Up or Massive Damage Up Talent Orbs for the respective boss's primary trait. The Continuation Stages are always named Cradle Wilderness, Summit Wilderness and Frontier Wilderness, but the level design is different for each Gauntlet.

There are two exclusive Gauntlets per month, which follow a naming scheme of "<Month> Gauntlet" and "<Month Gauntlet II>". The first map is unlocked after beating the main event of the month and appears from the 1st to the 16th, while the second is unlocked after beating the corresponding Lucky Ticket G event and appears from the 16th to the start of the next month.

Most of the monthly Gauntlets have a restriction of "Max # Number of Deployable Cats: 10"; the June and July Gauntlets are the only exceptions, having their own unique restrictions instead.

Seasonal Gauntlets are themed around different seasons and holidays. Rewards vary, and most are unlocked after clearing Empire of Cats Chapter 1 - excluding Summer Break Cats, which is available from the beginning.

Rewards and unlock requirements vary depending on the Gauntlet.

These are older versions of the main Gauntlets, consisting of three maps with a different set of enemies in each map. There are no Continuation Stages. Despite being phased out by the new "compressed" Gauntlets, these legacy maps can still be found in the game's files, unlikely to ever see the light of day again. 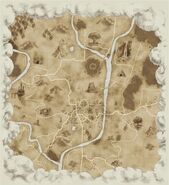 The map used in many of the Gauntlets

The enemy base used in all of the main Gauntlets