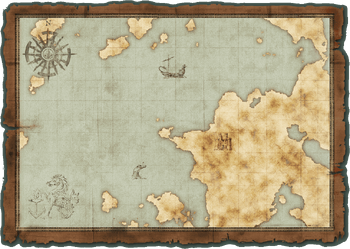 Ghost Sea (絶滅海洋タウン Zetsumetsu Kaiyō Taun, Extinct Sea Town) is the 13th sub-chapter of Uncanny Legends, and the 62nd sub-chapter overall. It was added in Version 8.5 and is available up to 4♛ difficulty.

Starred Aliens' strength magnifications are further increased from this sub-chapter onward, therefore the player will need to have all Anti-Starred Alien Treasures from all three Cats of the Cosmos chapters, especially for 2,500% Star Pengs and 1,000% Mesocosmocyclones. Otherwise, this sub-chapter is fairly straightforward; the hardest stages are probably Iwa Rock Reef and Nautilus Tomb.

This sub-chapter introduces no new enemies, however, the Starred Aliens from Cats of the Cosmos Chapter 3 appear in Legend Stages for the first time in this sub-chapter.